It is recommended that you run through the following list of Questions & Answers. It is likely that your questions are already handled. If not, simply send us an inquiry... ツ

This website is about prayer times for high latitude areas (45deg North and beyond). Among many proposed solutions throughout the history on how to determine prayer times for high latitude areas, this website promotes the implementation of combined prayer times, that is local time during normal period and standard Makkah time during extreme period. Needless to say that the time tables presented here are intended to cover the whole year and not only specific during Ramadan.

If prayer time in this website follows Makkah time during extreme period, why is the schedule not the same?

Let us discuss this issue by first considering case study for 19th May 2018. First of all, let us see what is the prayer time schedule for Makkah: 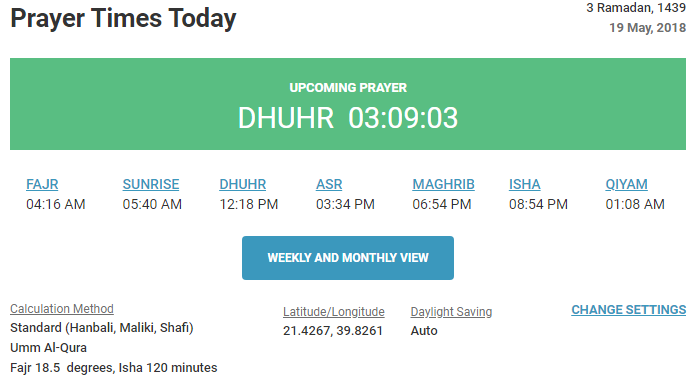 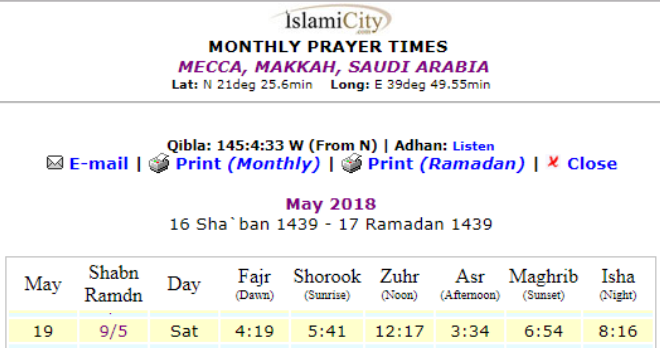 Afterward, let us see what is the astronomical calculation show us. Referring to the source www.timeanddate.com for 19th May 2018: 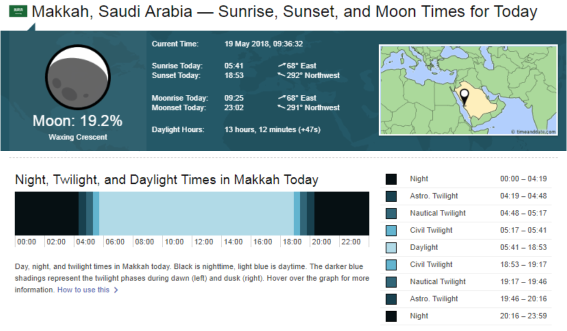 The above figure presents:

The answer can be found here. Please scroll down of the box at the right hand side and find “Time Zone”. It says Norway follows CET (UTC+1). This is the standard adopted time and valid during winter. While in summer, Norway applies DST (Daylight Saving Time), such that follows CEST (UTC+2). Noted: CET: Central European Time, CEST: Central European Summer Time, and UTC: Coordinated Universal Time. In short: the “true time” for Norway is during winter. While the “false time” for Norway is during summer, when there is one hour correction from the true time. Example is. If today (19.05.2018) the clock shows 05:15, then the true time is actually 04:15. With this regard, then the prayer time table presented in this website for Oslo is in fact adopting the Makkah time.

Why we need to perform such complicated approach? Why we don’t just apply the time in Makkah directly? It is much simpler, isn’t it? Well… the answer should be logic for anyone. The reason is we have to be consistent! Consistent in which sense? Well… When we in Oslo developing the standard Makkah time for Oslo, we did not look it at solely for Oslo, but for bigger area, e.g. Norway or even Scandinavia. Now, let us imagine the earth as a globe. Then point your finger to an arbitrary location (let say around the equator line, to make it simpler). Afterward, you turn the globe such that it rotates just exactly like the earth rotate in its axis, i.e. it goes from West to East. Opposite to that, your finger actually points to the Eastern part first and then the Western part. And also the time to make adzan (call for prayer) should be the Eastern part first and then the Western part. Now, if whole Norway has the same time zone (in fact yes), then the adzan should be performed consecutively, from the Eastern part of Norway until to the Western part of Norway. It should be consecutively, not at once! If we apply exactly the time in Makkah directly, then it is absolutely in any where of Norway, they will make adzan all at once! If this is to happen, we fail to be consistent with the nature of the earth rotation as Allah SWT has created.

If we have perfect night, then we apply the local time correctly according to local astronomical phenomena. In addition, there is 30 days transition between the normal and extreme period.

How to determine Asr time?

How to determine Maghrib time?

Maghrib time means at sunset time. Sunset is defined as the instant in the evening under ideal meteorological conditions, with standard refraction of the Sun's rays, when the upper edge of the sun's disk is coincident with an ideal horizon.

In the otherhand, sunrise marks the end of Fajr prayer. Sunrise is defined as the instant in the morning under ideal meteorological conditions, with standard refraction of the Sun's rays, when the upper edge of the sun's disk is coincident with an ideal horizon.

How to determine Noon time? 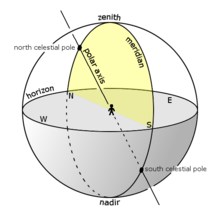 How to determine Isha and Fajr time?

Isha begins when the red twilight or the whiteness at the western horizon disappear and the sky becomes dark. This corresponds to the sun's position at approximately 18 degree below western horizon.

What is extreme period?

Extreme period is defined as period when:

How to determine the limits of the extreme period?

In order to determine if there is any summer extreme period and its corresponding limits, the following checks focusing on summer (or even could start from late spring to early autumn) can be done:

The limit which gives the longest period of summer extreme period is selected.

In order to determine if there is any winter extreme period and its corresponding limits, the following checks focusing on winter (or even could start from late autumn to early spring) can be done:

The limit which gives the longest period of winter extreme period is selected.

What is normal period?

Normal period is defined as period when all astronomical phenomena to determine the prayer times exist.